La’Britney is a rising,  L.A based singer who is determined to reach the pinnacle of the music industry. Since starting her singing and dancing career at age 11, La’Britney has achieved widespread fame, appearing in dance videos with prominent artists, and generating thousands of views through her self-curated, “LaMix” videos.

In “Actin Funny”, La’Brintey flosses her new bag to her fake old friends, haters, and anyone else who’s ever felt some type of way about her getting to her money. She’s unapologetic about her bag, flossing in red leather, gold chains, and of course- a flossy mustard fur. La’Britney was swagged out in gold chains that read Moschino-which we all know is a staple of luxury in the industry. Anyone who’s dealt with shady people in their life can relate to this song. Get your bag up and let the haters dwell in their negativity.

“Actin Funny” was inspired by people close to La’Britney, taking shots and being shady. Like all girls who are close to their mothers, she leaned on her mom for advice on how to deal with her so-called “friends” bringing negative energy into her environment. Her mother responded with a quote that stuck with her- and myself, “In life when you start to progress and you’re doing things that people around you don’t understand, it is easier for them to look down and hate. They act funny instead of showing love and support.”

After the phone call with her mother, La’Britney went into the studio, freestyled and cut her entire verse within in an hour. Not to mention she came up with the concept for the video on the very same day.

“I wanted it to be flossy and bossy, but what I wanted to shine through the most was girl power, boss power! Two big women making good music and having a good time while doing it!” -La’Britney on Acting Funny video concept.

La’Britney on Teaming Up With Kash Doll

Getting Kash Doll to spit a verse for her single was no hard task for La’Britney because the two already had a natural relationship with one another. Both artists hail from Detroit and already supported each other’s music endeavors. Women coming together in music has been a beautiful thing recently and it’s especially gratifying when they come from the same city. After spitting her verse for “Acting Funny”, La’Britney knew that Kash Doll would be the perfect artist for the feature. After all, Kash Doll always makes the internet pop with her fashionable swagger. 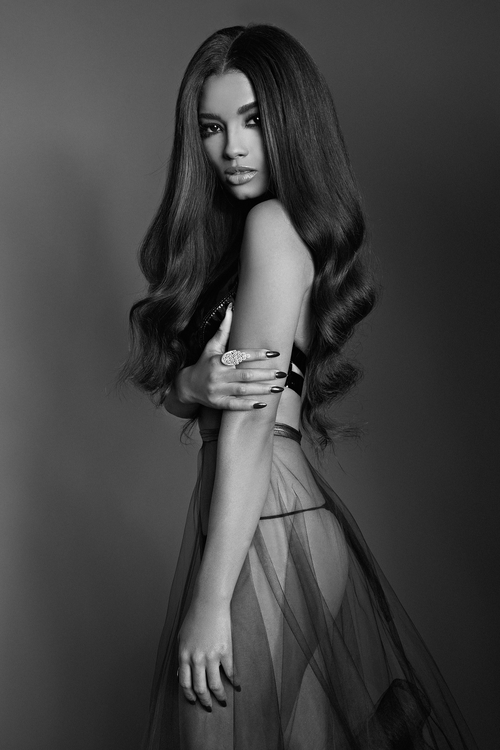 La’Britney stated that she has no time to waste and no games to be played.

You can feel this energy throughout her video. La’Britney is working hard to cement her name in the industry and she has no time for anyone or anything trying to interfere with that. After all, making it in this business is about more than just fame and designer handbags; La’Britney got her money up for herself, her child, and her family.

“No time to waste, no games to be played. It’s about more than just me. I have people depending on me to eat every day. Every day I wake up and give it 120% I have to make it I have mouths to feed, I don’t have time to waste. I don’t need nothing or no one around me draining your energy.”

La’Britney Is More Than Just An R&B Singer.

La’Britney is also a social activist with her own movement, “Beauty & Brains”.  The “Beauty & Brains” movement emphasizes the importance of being an intelligent woman. While La’Britney appreciates flossing just as much as the next boss, she also understands that hard work and knowledge is what makes a woman a beautiful boss. The movement is open to all women who are driven to achieve their goals and support other women. When speaking of her movement, La’Britney stated, “Beauty and Brains. It don’t get no better than that.”

Keep Up With La’Britney Below

0 0 0 0 0
Previous ArticleNew Vibes: Songs This Week You Need To Hear
Next Article"Be Careful" With Cardi B: Listen to the Rapper’s Latest Single
Comments (0)