After an impressive line-up of presentations during the morning half of New York Men’s Day to kick-off Spring/Summer 2020 Men’s Fashion Week, the afternoon collections certainly managed to keep the momentum going.

With a diverse range of offerings and no one collection even remotely the same, several of the most innovative and emerging brands closed out NYMD with some seriously show-stopping designs that simply oozed creativity:

In collaboration with Mobvoi––an artificial intelligence company defining the next generation––Todd Hessert took Quantum Theory to the next level. The collection featured neutrals, earth tones, and soft hues in a variety of different styles from tracksuits to slip dresses. Fusing fashion with art from the Quantum Theory perspective, one of the models wore a stylish and adult version of the light-up shoe that you never wanted to take off as a child.

Set in the Greek classroom during the mid-war period, the Spring/Summer collection of Vasilis Loizides explores the idea of nationalism and education. The pleasantly over-the-top and gender fluid designs boasted contemporary versions of classic Greek clothing and imagery associated with the culture. Loizides is known for challenging gender norms and that was a prevalent theme throughout the entire collection.

Inspired by multicultural city with a Japanese Wabi Sabi aesthetic, Tanaka’s S/S 2020 collection paid respects to vintage and historical clothing that is deeply rooted in culture. The line featured denim pieces in varying colors with boasting splats of glow-in-the-dark paint, which was vivid throughout the presentation thanks to the intentionally low-lighting in the room and theme-appropriate strobe lights.

The Spring/Summer collection of Ka Wa Key was inspired by people who have sailed the seas and have a story to tell. With lots of blue & white, stripes, and burn-out & tie-dye elements, the collection is the epitome of coastal chic.

According to designers Siying Qu and Haoran Li, The Private Policy Spring/Summer 2020 collection is “a call for community so we can overcome societal challenges and prevail with courage together”. Inspired by the Stonewall Inn Riot of 1969, the line featured slanted-checkered patterns in the form of biker shorts, button-down tops, baseball caps, and t-shirts.

Introducing a new uniform for the brand’s fashion army, the most recent WHA collection represents the result of spiritual enlightenment. In vertical black and white stripes for a stark contrast, each piece features the brand name and its own individual attributes. From shorts with a zipper hem, to another pair that discreetly boasts silver eyelets, to lace-up hoodies and pullovers with buckles, the pattern and color way may be the only consistent element throughout the presentation.

For the Spring/Summer Collection of Krammer and Stoudt, the designers created a 7-piece capsule that embodies what they consider to be integral to the modern man’s wardrobe. The capsule is comprised of 3 outerwear pieces, 3 pairs of trousers, and a utility vest in solid black with pops of neon green, orange, and pink shown through flames, large stripes, and unusual faces that somewhat resemble Hawaiian Tikis. 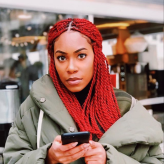